The Chiltern Hills cover an area of natural beauty less than forty miles north-west of London, England. Geoff Apps spent his teenage years growing up there and developed a love for being at one with nature whilst cycling in the woods. Here people come to relax, walk, ride horses amongst the peaceful hills, woods and valleys.

Geoff was also a skilled motorcycle ‘observed trials’ rider but, on his non-competitive forays, was always unhappy with the noise and disturbance his motorbike caused. What he wanted was a silent and capable off-road machine. 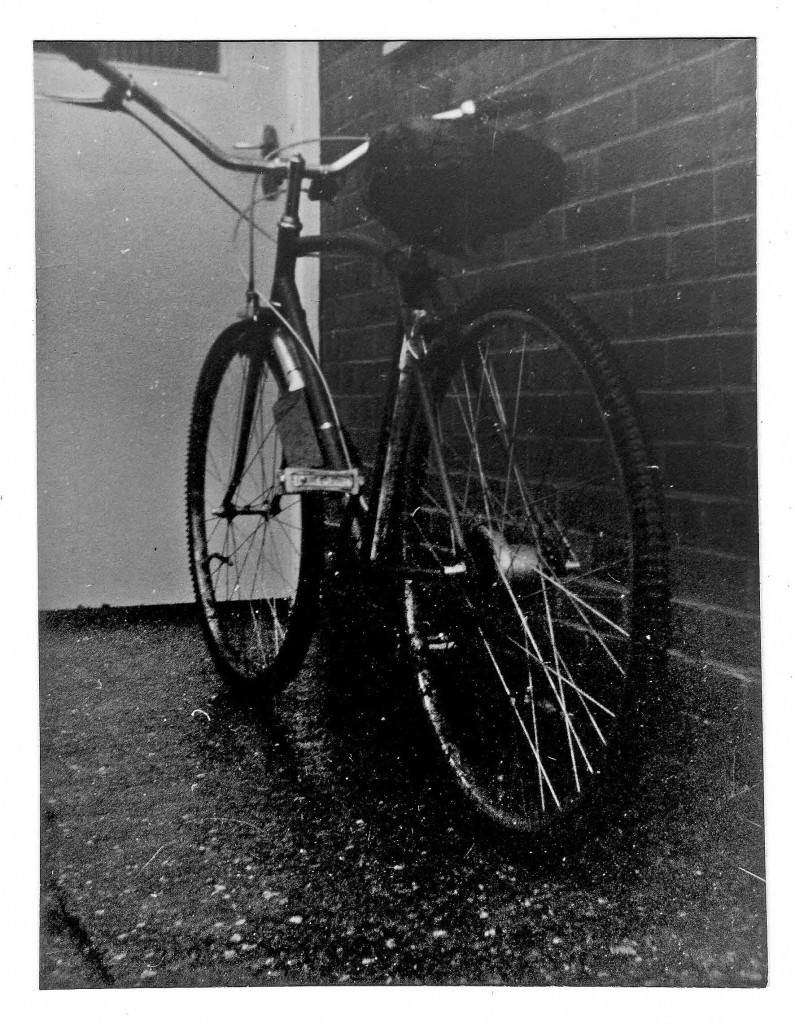 Combining the two disciplines, he modified his Raleigh Explorer road-bicycle, (designed for 24″ wheels) fitting 26″ wheels (650A or 37-590), longer front forks (for 27″ wheels), high and wide handlebars and a 36 tooth chainwheel from a moped. This machine was but a single step on a life-long journey of experimentation, where any vaguely suitable form of bicycle component was evaluated and modified in order to improve off-road performance. That process continues today: https://crosscountrycycle.wordpress.com/

1977 saw Geoff concentrating his efforts on his bicycle designs, and by 1980 he had sourced a cocktail of suitable motorbike, BMX, and bicycle components, including 2″ 650B snow tyres from Finland, and wear-compensating (floating cam) moped hub brakes from France. In order to fulfill his ‘short-high’ riding concept, it was time to have a custom-built frame made.

Finding a frame-builder who was prepared to turn Geoff’s heretical design into steel was not as straightforward as one would think nowadays. Finally, in 1979, the first custom-made Cleland frame was made by Dee’s of Amersham, and a prototype completed. 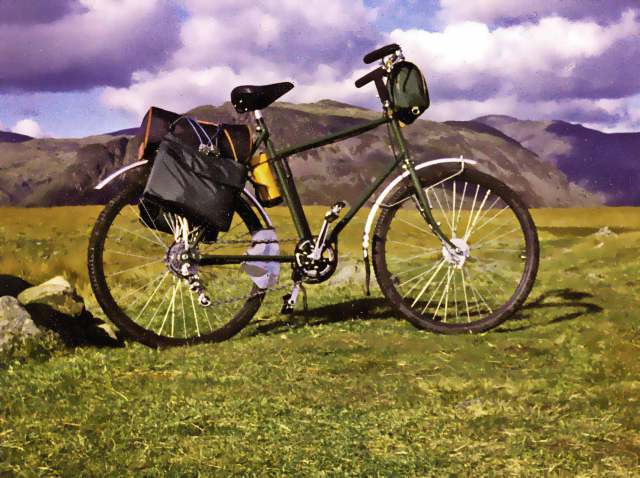 To replicate his concept, Geoff linked-up with Jeremy Torr, who ran English Cycles in Telford, Shropshire; the design was refined and the Cleland Aventura replicas began to appear in 1982. 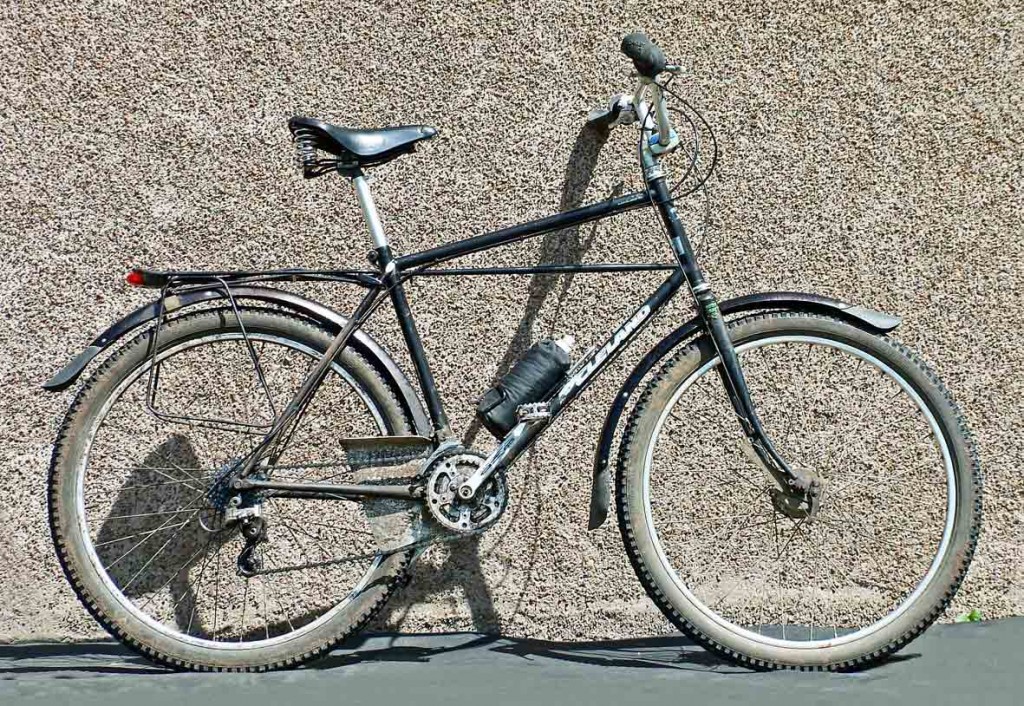 Most were designed around the 650B wheel format, but a 700C (29er) version was also produced.

Let’s get a couple of things straight here; first, rarely in cycling is there anything that is truly new, so while this 29er version certainly pre-dates the current ’29er’s by a good few years, it would not be surprising to discover that something significantly pre-dates this. Second, rather than saying ‘this was first, so there!’ the following is more a tale of how mountain bike evolution could have followed a different path from the one it did.

The Aventura prototype pictured below, built in 1981/2, featured, amongst its many innovations, 700c tyres. The reasons for having larger wheels back then are the same ones that are making 29ers popular today – a freer rolling, smoother ride over bumps and rough terrain, with improved traction in loose dirt and mud. Supply difficulties resulted in production models featuring 650b tyres, a slightly smaller rolling diameter tyre/rim size in which Nokian also made some suitably sturdy tyres.

It’s worth recalling that back then there were almost no off-road bicycle tyres available in the 26″ format, or any other size, apart from 20″ format for BMX. As Geoff relates below, but for a better supply situation, mountain biking history may have been quite different… 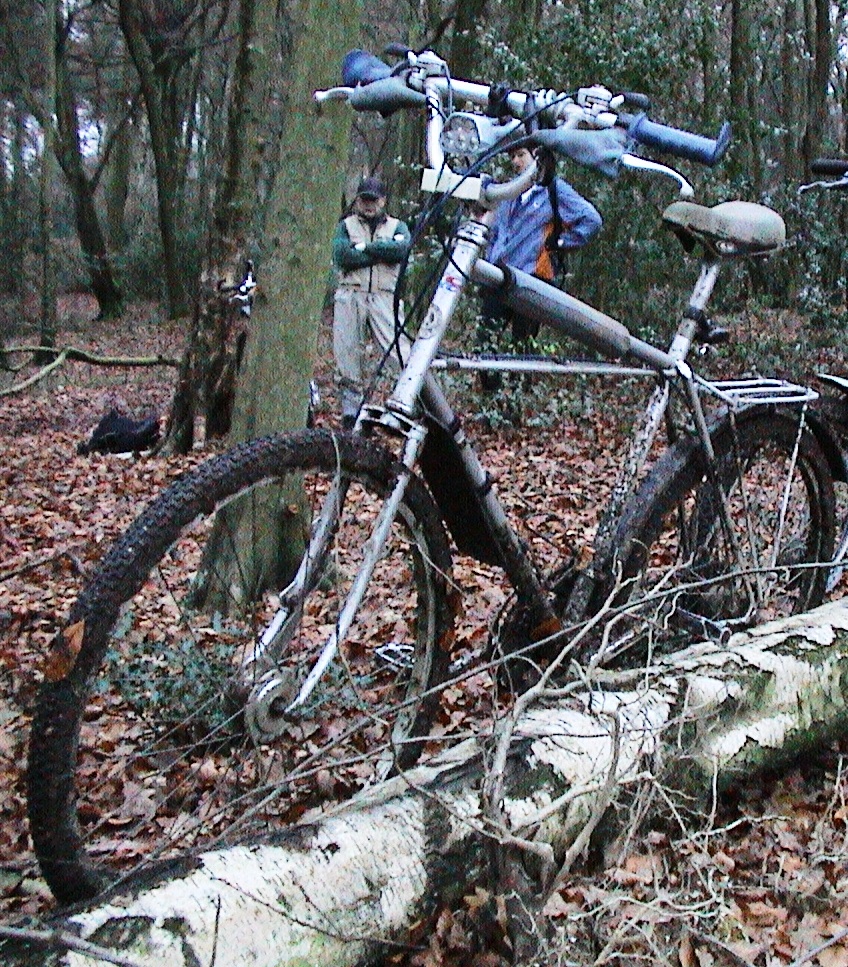 In a letter to UK bicycle industry trade journal Bike Biz (published in the December 2006 issue) Geoff explained what happened:

The photo here shows an early prototype Aventura. It has 700C tyres. This was around 1981/2. Nokia (now ‘Nokian’) had this size listed from around 1979/80 but it took ages to get some. I persisted because I knew they would be good. I built only the one 700C machine and sent some of these tyres over to Charlie Kelly and Gary Fisher, who had built a frame in readiness. They loved them and really appreciated the ride they gave, compared to the 26-inch tyres, and also loved the success they had at the races. As far as they were concerned, these 29-inch tyres were the way to go.

“This was the ONLY tyre of this type and size in the world, there was no choice. Unfortunately getting a supply of tyres was almost impossible”. Geoff adds “The 26-inch wheel standard (for mountain bikes) was not absolutely fixed at that time, so, had the supply situation been better, it is quite possible that 700C tyres and wheels would have been the mountain bike standard now.”

“When I tried to promote the 700C idea to UK mountain bikers they just thought it was bonkers Apps, raving again, like he did about short wheel-base, steep angles, sloping top tube, twist-grip gear shifters…”

Coincidentally, in the same issue of Bike Biz, Gary Fisher, speaking about the growing popularity of 29ers, gave his perspective:

“We got some tyres from Geoff Apps really early on and we [Fisher and Kelly] said ‘Holy Toledo!’” But the poor supply situation of the larger diameter tyres meant the fledging MTB industry stuck with the smaller wheel size.” 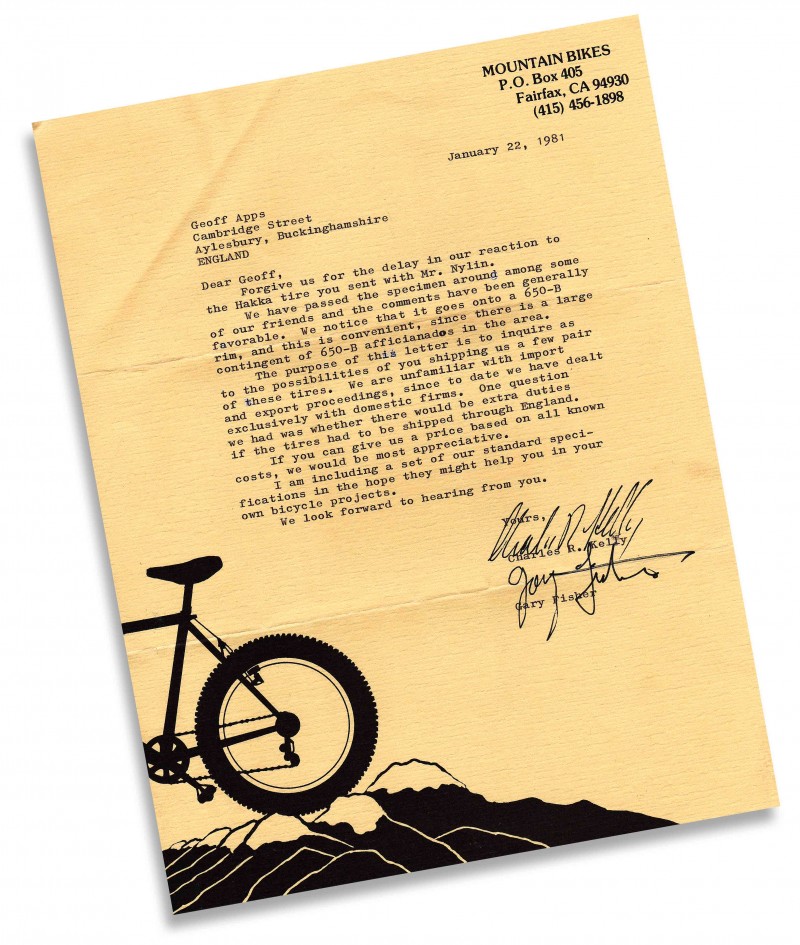 Anyway, the 650B tyres seemed to get quite a good reception, but these were equally difficult to get hold of, so Geoff had to keep stocks for his own Aventura production.

1984 saw the arrival of American style mountain bikes on the British market and Geoff became one of the most energetic promoters of this fledgling sport.

The Californian-inspired bikes may have found it difficult to cope with the slippery conditions, and all too easily clogged-up with mud, but they did promote the activity that Geoff was now devoting his life to; seeing his own design as a part of the movement as a whole.

He was also one of the founders of Making Tracks, a mountain biking fanzine. After Making Tracks was absorbed into New Cyclist magazine, Geoff joined its editorial team and moved to the Scottish Borders, where he lives to this day, enjoying the quiet roads and extensive hill tracks that are a feature of this area.
The Demise of Cleland Cycles Limited

In 1984, Cleland Cycles was put out of business by one of its suppliers, namely Ron Kitching, who applied to have the company liquidated on a debt of just over £500 which was a few days overdue.

This aggressive act means that we will never know how the Cleland design would have fitted into the overall mountain bike market. At that time there was only one type of mountain bike and the market was tiny.

Over the following 25 years, we would see a wide range of ‘mountain bike’ styles emerge, from downhill to cross-country, from freeride to dirt-jump. Presumably, the Cleland would have been one of these ‘styles’, had it not been the victim of this, as it turned out, terminal act; Geoff had exhausted not only his financial resources, but his physical resources as well.

Nevertheless, he and others have continued to develop his ideas. For example, a 24″ wheeled machine, dubbed Dingbat, appeared first, in 1985. The Clelandale, an attempt to create a Cleland from stock parts, followed this in 1988; Cannondale Beast of the East frame, high-rise-short-reach handlebar, Sturmey Archer drum brakes and, harking back to 1968, 26″ X 1 3/8″ or 37-590 wheels and tyres.

A small, but dedicated, circle of Cleland admirers developed, including other companies who were inspired to produce their own versions of his designs, notably: English Cycles and HighPath Engineering.
Cleland into the 21st Century

Although the steep and short frame geometry, and several other features of a typical 1980 Cleland, have long since been adopted into mainstream mountain bikes, (look at your average Jump Bike) no single modern bike brings all the design and component elements of the Cleland concept together in one unified machine.

Geoff and other enthusiasts have continued to develop their own Cleland-style bikes and, after a gap of nearly 20 years, in 2006, Geoff began building again and designed a new 29er Cleland, given the logical name Aventura II. This followed his original design more faithfully than was possible back in 1978 because appropriate components were becoming available.

Geoff has never regarded the Cleland as exotica; it is a down-to-earth practical machine.

The new Aventuras are based around a simple and relatively cheap off-the-shelf frame and built up utilising Shimano Nexus Inter-8 internal hub gears and hub dynamo, IM70 roller brakes, full-length SKS extra wide mudguards fitted with elevated stays and extensions, 2.4″ 29er tyres and wheels with narrow rims, transmission protection tubes, alloy slateplate, radical ellipsoid chainrings and bashplate, Haworth swing pedals and a Brooks narrow sprung saddle. The bottom bracket bearing is larger than standard and is around 14″ above the ground, and, of course, they have the signature high-short riding position. 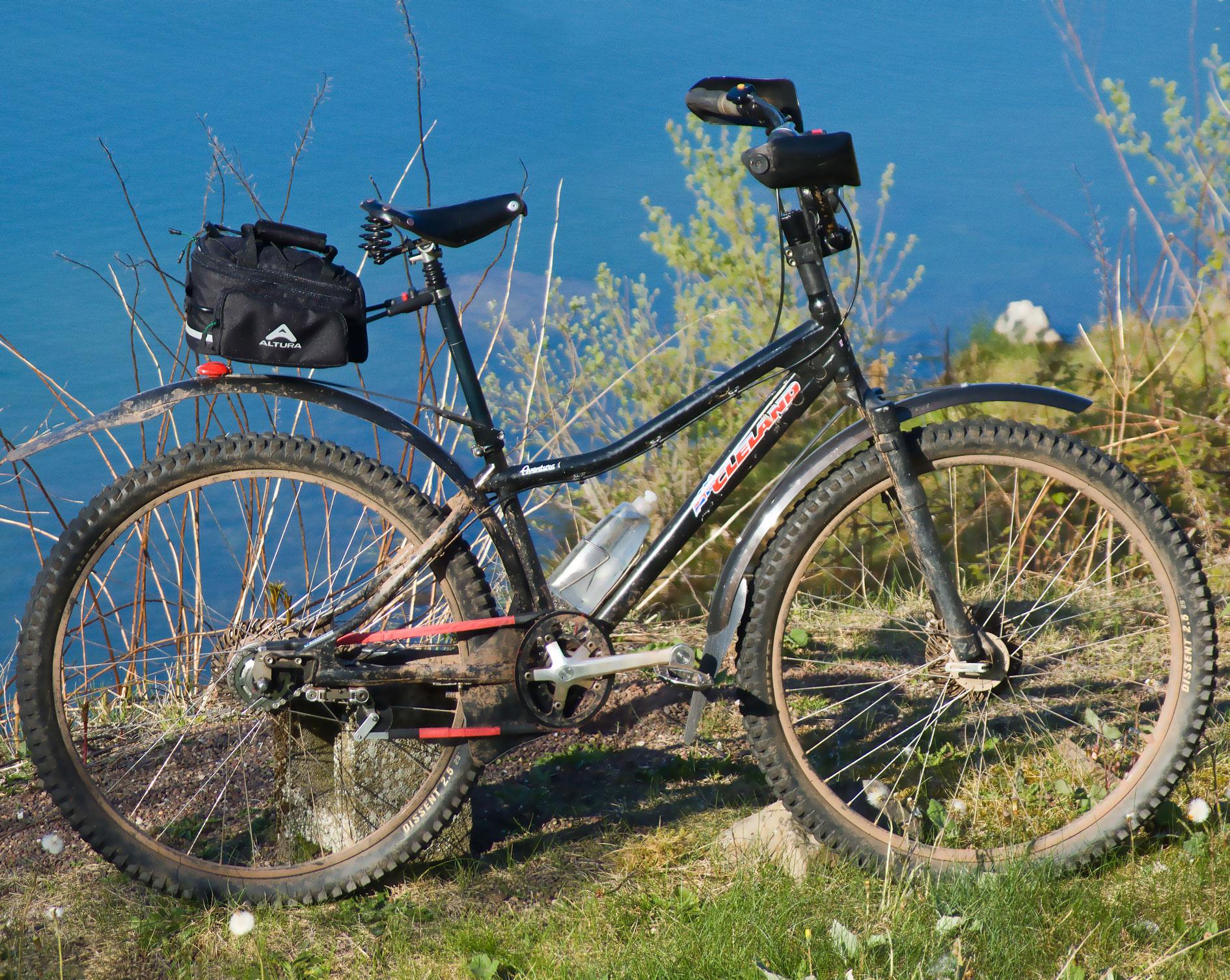 Geoff remains as enthusiastic as he ever was; never one to blindly follow trends, he continues to innovate, quietly ploughing his own furrow.

Below is some old video footage of Geoff riding a 1982 Cleland Aventura through the typical Chiltern mud. During the 1960s, 70s & 80s the Chilterns were much wetter than today and every ride would be predominantly muddy, sometimes sloppy (as in the video) and sometimes claggy, and every consistency in between. Hence the requirement for mudguards and other features to cope with this. It was a common enough occurrence during the last 30 years. But seldom photographed or filmed.

And to bring this history right up to date, you may be interested in following the stages of creating the latest incarnation of this design of bike. Geoff is writing a blog (https://crosscountrycycle.wordpress.com/) to explain the reasoning behind the selection and/or design of each component, before describing the actual process of assembling them into a modern replicable machine that more or less anyone could build for themselves.